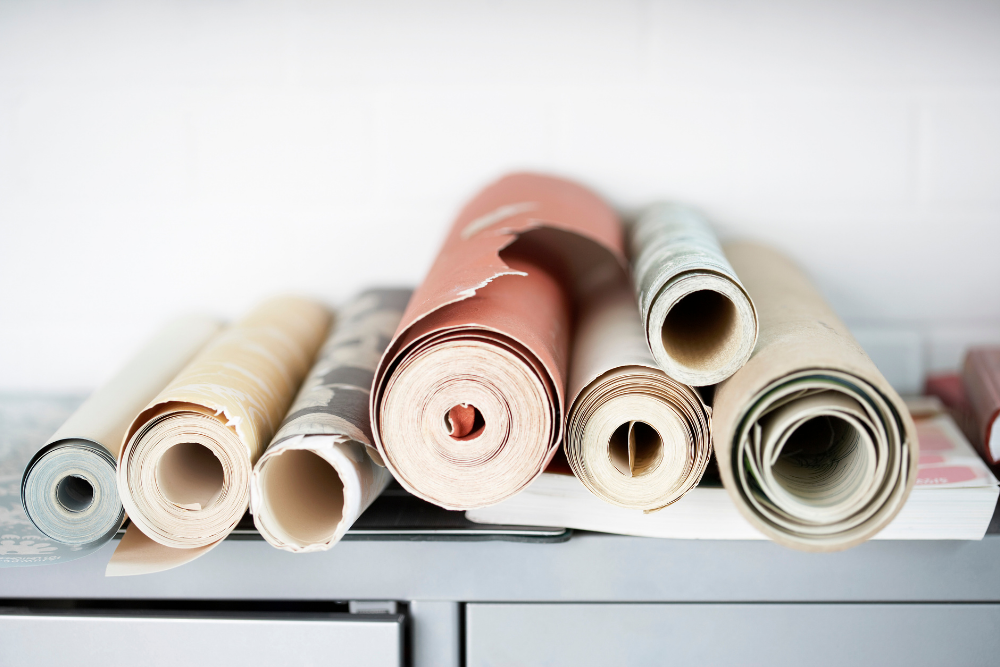 I wish I was a fearless trendsetter in design, let alone about setting any. But the fact is that it usually takes me quite a while to warm up to use a material I am not used to or know much about. Wallpaper is becoming my new obsession and I am determined to use it in our own renovation in 2022 as well as warming clients to be a little bold to add personality into a space and take risk. After all life is too short not to right?

Many people hear the word “wallpaper”, and they are back  at grandma’s lounge room watching a black and white tv. Modern wallpaper is not granny’s wallpaper of years ago.  Wallpaper design has certainly changed throughout the years. Not to mention types of wallpaper. Today we have DIY options, stick on options, old fashioned paste and hang options lists goes on.

So let’s try to debunk all the myths and questions about wallpaper and let me try to convince you why you should use wallpaper in your home. 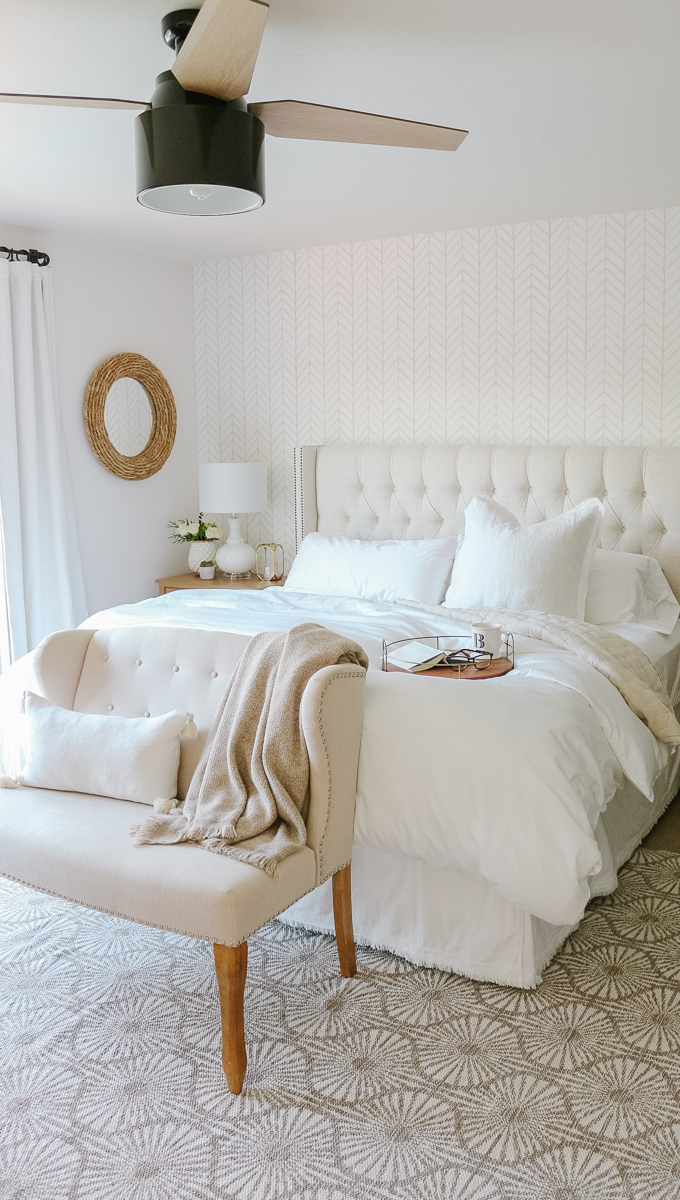 Wallpaper is cool again, it’s hip, on trend and making a big comeback to add a splash of colour and interest to rooms. Now days it is used more as a “wow” feature and it certainly delivers. But don’t chose to have wallpaper in your home because it’s on trend or cool or you saw it on some instagram home….. sigh

Educate yourself about wallpaper, gather samples and try it out. You never know you may love it? It may just be the little piece of magic you have been looking for in your home.

The surprising story of wallpaper!

Yes I know a history lesson you are saying! really… But to know the background of any interior product helps you to know the story and after all wallpaper is a story.

Originating in In 1675, a Frenchman and engraver named Jean-Michel Papillon made the first wallpaper. The earliest wallpapers were used to decorate the insides of cupboards and smaller rooms in merchants’ houses rather than the grand houses of the aristocracy. But by the beginning of the 20th century, it was being used everywhere, in hallways, kitchens, bathrooms, and bedrooms as well as reception rooms, and was popular in both the wealthiest and poorest homes.

Up until 1840 all wallpapers were produced by hand using the block-printing process that was labour-intensive and slow. Manufacturers were keen to find ways of speeding up production and in 1839 the first wallpaper printing machine was patented by Potters & Ross.

In 1961 the first pre-trimmed and prepasted wallpapers appeared, shortly followed by laminated papers, metallic finishes, and then tough, scrubbable vinyl wallpapers. The 1960s and 1970s represented a high point for many wallpaper manufacturers when sales were strong and designs were bold and modern.

The oil crisis of 1973 led to a reduction in the size of the industry world-wide, with many firms went out of business. Increasing competition from the paint industry and the popularity of finishes like stippling and rag-rolling in the 1980s also led to reductions in sales and the only areas of growth were in the cheaper, mass-produced goods sold in DIY superstores.

Although wallpaper fell out of favour during the 80’s and 90’s, people in the 21st century have rediscovered the romance, design and beauty of patterned walls and some of the old designs are being reproduced for the modern market.

Fast forward to 2022 and  “An entire generation that has no previous assumptions regarding wallpaper removability are discovering wallpaper via social media, and identifying it as a way to easily personalise spaces, because technical advances in removability have kept pace with consumer demands.”

What! That’s Not Wallpaper…

Yes i know the stick on tile wallpaper  from Kmart are being used as a wallpaper in some homes – just don’t do it please i’m begging you. Or even worse the trend of covering everything in vinyl wrap OMG where do I begin. If you want to use wallpaper do it properly and yes stick on wallpaper these days is amazing but the REAL stick on wallpaper, the stuff that it designed to stick on walls. So lets do a round up of the types of wallpaper.

Types of Wallpaper The Main 3

There are so many variants here I could go on and on but we will discuss just the main 3. The ones you are most likely to come across in your search. 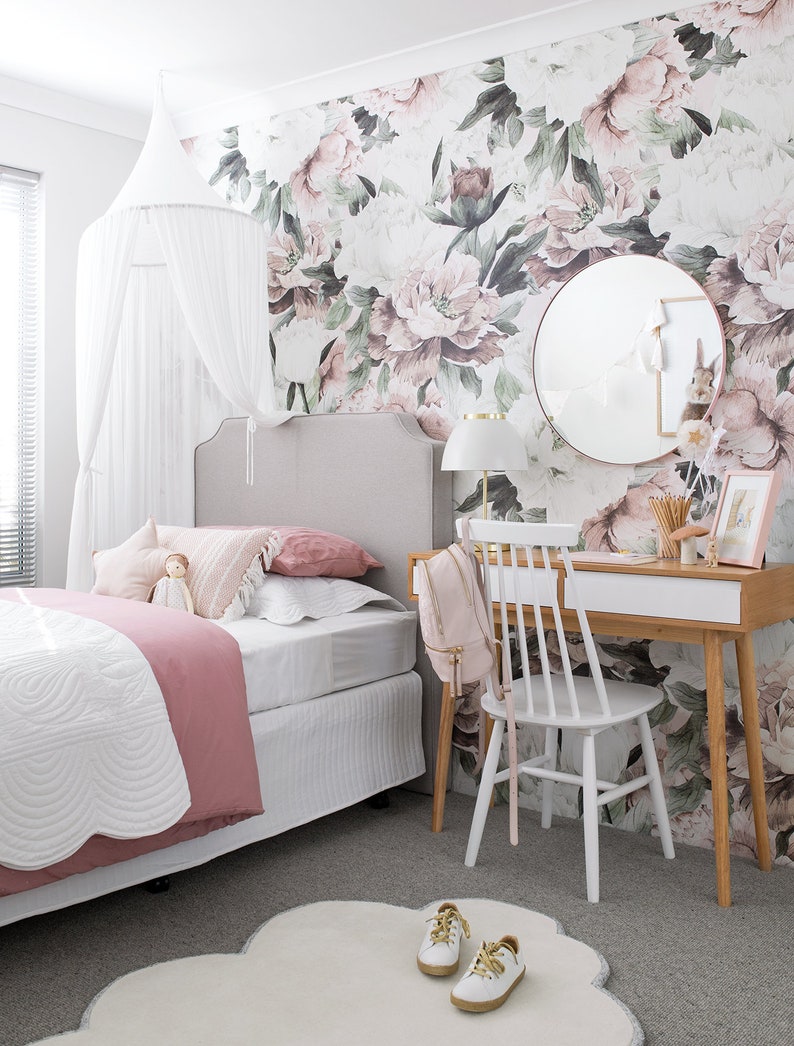 This type is commonly used and available in a wide variety of colors and patterns. The digitally-printed wallpaper is normally cheaper than the hand-printed, and it can be mass-produced, but it could be torn easily. Also, the printing ink is water-based, so it’d better not be used in kitchens and bathrooms. Unless you have a very handy dad who hung wallpaper in your 80’s home like mine, then I suggest a professional wallpaper hanger. Though you tube is pretty good these days…. 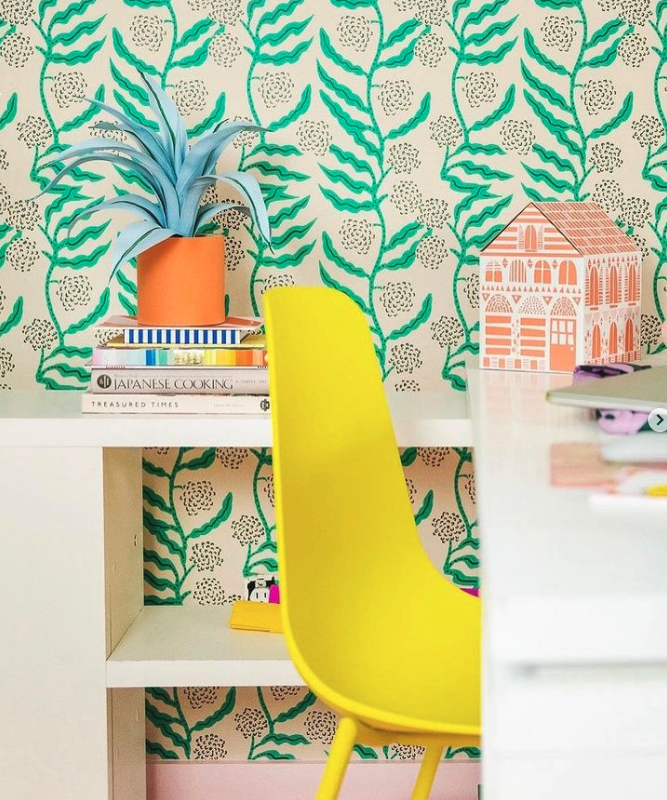 This just simply means the paste is already on the wallpaper – just add water.  It is the most commonly used type of wallpaper, currently, because of its high durability. You still have to hang it and this is where I would be hiring a hanger who specialises in wallpaper. Image above courtesy of Spoon Flower one of my favourite all time fabric and wallpaper businesses. 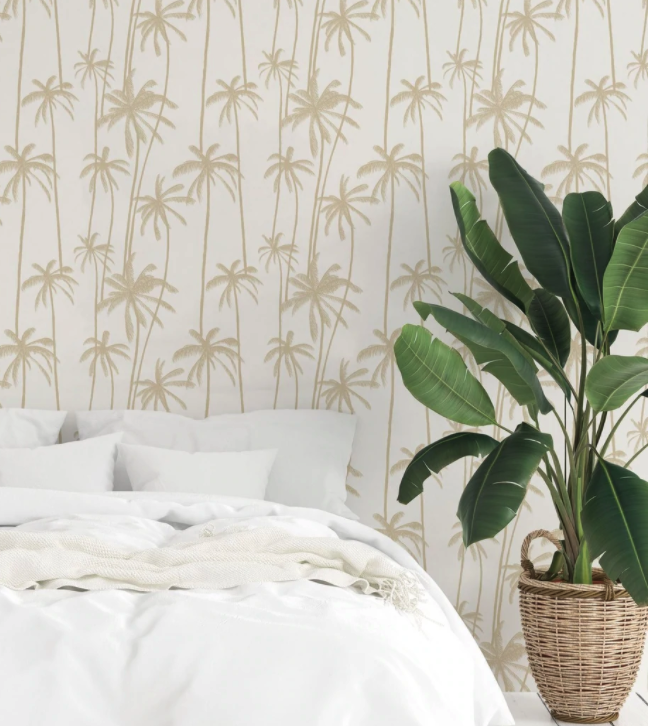 Peel and stick wallpaper is relatively new to the interior design world, and is the easiest type of wallpaper to remove. It’s also the easiest to apply, requiring virtually no prep work or clean up. Peel and stick wallpaper is like a sticker. It’s different from water activated wallpaper — you don’t want to get it wet during application. It has a paper backing that you peel off to reveal the adhesive side. The better brands also have worked out the magic of making this moveable. Perfect for renters as it does not damage the walls unlike Kmart vinyl!! My favourite is from Olive et Oriel and I have a sample sitting in my office waiting to go on my laundry wall. See the image above of the one I chose – I mean who doesn’t love a palm tree… 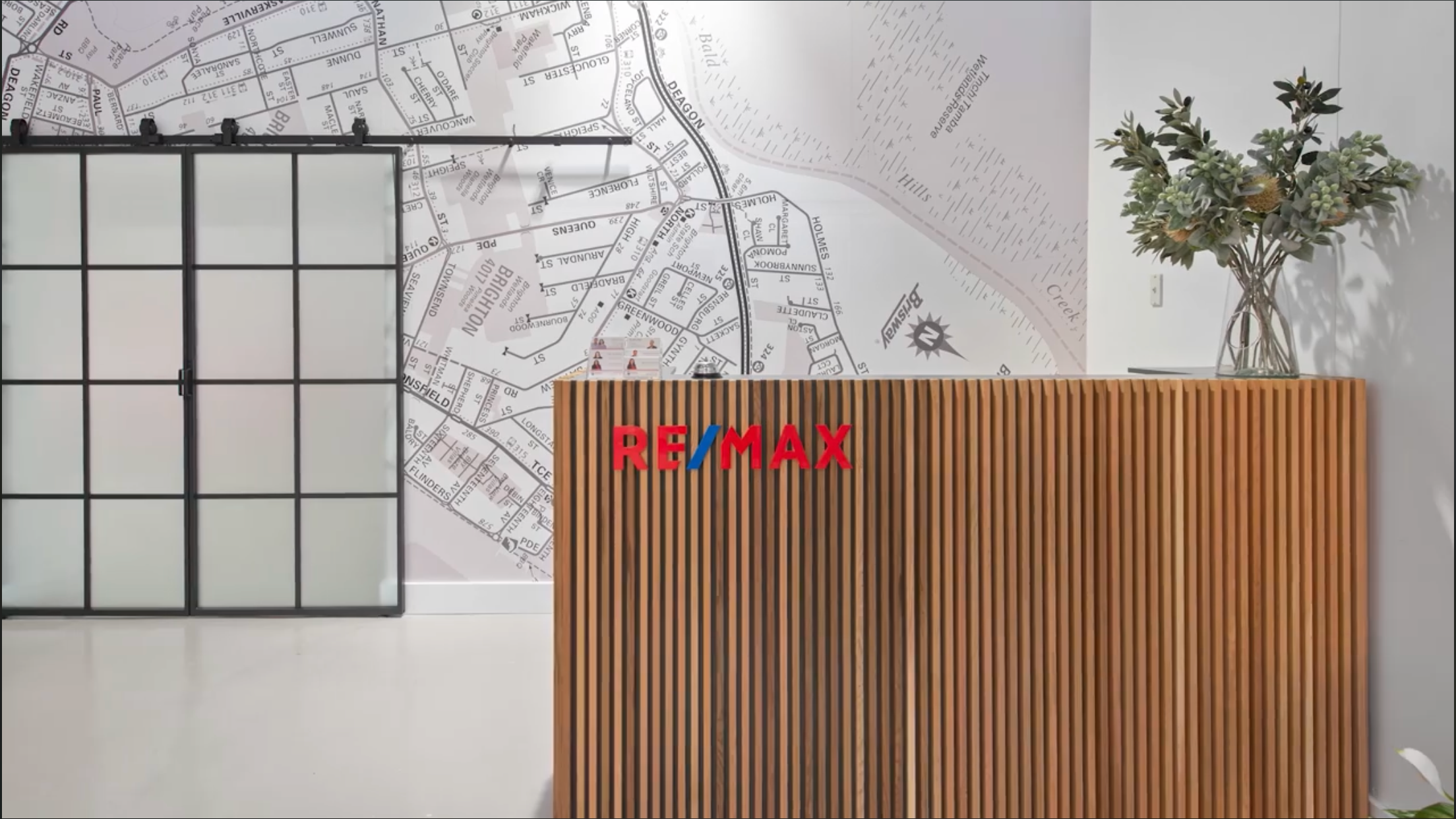 We recently did a real estate office interior styling the reception room and used a map of the local area which we had sourced, designed and made onto wallpaper and hung by the amazing team at Graphico. The possibilities of wall paper are endless from photos to colours to design. Just let your imagination run wild.
Next time we will discuss measuring and hanging wallpaper the most FAQs of all.

I have sourced wallpaper for clients from our trade only suppliers and let me tell you there are so so many options. Do not feel overwhelmed – chose one that speaks to you and makes you smile. Do not over complicate it. If you need help designing your space say hello here 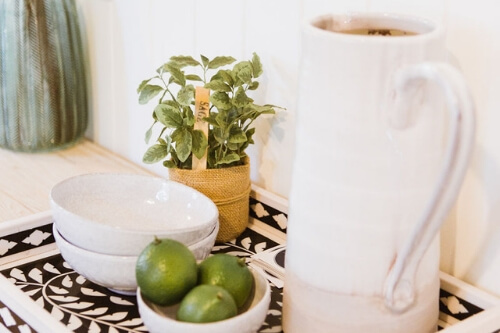 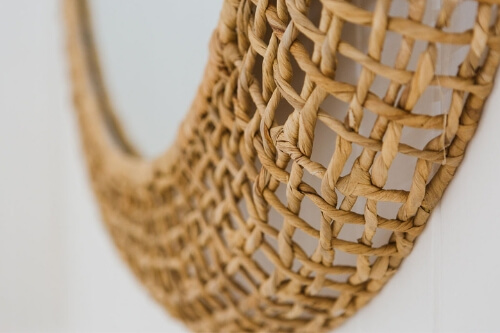 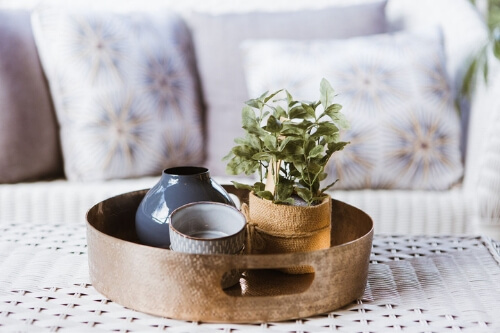 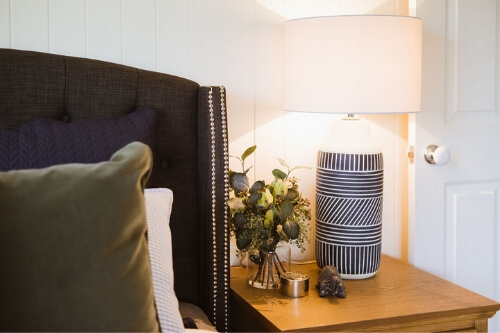 We have helped clients sell over $15 Million worth of property

over $1M in profit

Our Last 6 Properties Have SOLD at First Open